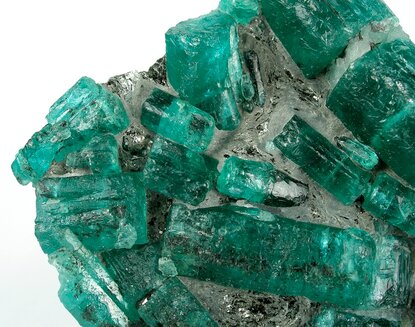 The Fourth Foundation Stone of the Heavenly Jerusalem:

"Emerald. The emerald is of so exceedingly deep a green as to surpass all the green herbs, leaves, and gems, and it colours green the air reflected round, and it deservedly increases in greenness although naturally imbued with it. And there are very many kinds of this stone, but the most famous are the Scythian; the Bactrian hold the second place, the Egyptian the third. Accordingly, it represents souls always flourishing in faith, which the more they are tried by the opposition of the world, which is denoted by the cold of Scythia, strive the more to conceive in their mind by hope “the unfading and eternal inheritance which is reserved in heaven,” and extend it to their neighbours by preaching. And these also by the cup of the Lord’s Passion, and the unction of internal charity which is given through the Holy Spirit, advance toward the contempt of the world.
With these also the land which is the country of the same stone corresponds in a beautiful manner, a land which is rich but uninhabitable. For although it is plentiful in gold and gems, the whole of it is occupied by griffons, very fierce birds, or rather flying beasts, Since they are fourfooted, and in body indeed are like lions, but in head and wings like eagles. The Arimaspians, who are said to be remarkable for a Single eye in the middle of the forehead, fight with them, that they may obtain these stones, which these creatures seize with wonderful avidity, and the Arimaspians guard. It was to this land, abounding in treasures of virtues, that the Psalmist had gone, when he said, “Behold, I fled away far off, and remained in the wilderness;” that is, by fleeing far off, I withdrew my soul from the allurements of the world. Here he had met with the wild beasts which were opposed to him, when he said, under inspiration, “Let the deceitful lips he made dumb, which speak iniquity against the righteous, in pride and contempt.” Here also he shews that he found desirable riches, in that with gladsome admonition he proceeded to add this, “How great is the abundance of Thy sweetness, O Lord, which Thou hast laid up in secret for them that fear Thee,” and the rest to the end of the Psalm.

Against birds of this kind, which desire greedily to snatch away from us the seed of the divine word, all the saints watch with a single intention through heavenly desire, as if to be admired for one eye; that they may be able to search out and dig up the gem of faith and of all other virtues. For indeed the higher any virtue is, the fewer admirers has it, and the heavier persecution does it endure from unclean spirits, who like horrible griffons, are of the earth in the baseness of their deserts, but of the air in the loftiness of their proud mind; and who strive with unwearied labour not to possess spiritual riches for their own use, but to take them away from men. And because such sublimity of faith has become known to the world through the Gospel, in that there are four books of the Gospel, the emerald is fitly put in the fourth place."

​​[The Explanation Of The Apocalypse, by the Venerable Bede, 7th Century Father of the Church]
​​​
SHOP EMERALD DESIGNS