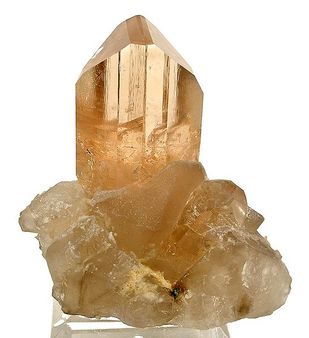 The Ninth Foundation Stone of the Heavenly Jerusalem: Topaz

"Topaz. As the opportunity is rare for the discovery of this stone, so also is the quantity of the commodity scanty.  It is said to have two colors, one of the purest gold, the other shining with ethereal brightness. There is a rosy plumpness, and modest purity. It is close to the chrysoprase in size, or color, as it is in an especial manner a lamp, when it is struck by the rays of the sun, and surpasses the most precious brilliancy of all gems, and attracts in a singular way the most eager desire of the eyes. And if thou wilt polish it, thou makest it dark; if thou wilt leave it in its own proper nature, it is radiant.

This stone is said to be an object of admiration to kings themselves, so that they recognize no possession like it among their riches; and the most beautiful quality of its nature is with the best reason compared with the grace of the contemplative life. For holy kings, “whose heart is in the hand of God,” deservedly prefer this to all the riches of good works, and the gems of virtues; and they direct towards it most of all the glance of their pure thought, and their sight; and they embrace in their mind the more ardently the sweetness of the spiritual life, as they more frequently receive in themselves the reflected splendor of supernal grace. Holy men, therefore, have a golden color from the flame of internal charity; and they have also an ethereal one from the contemplation of supernal sweetness; and this often deteriorates from the whirl of the present age, as from the rubbing of a file. For in one and the same moment the mind cannot easily be tormented by earthly labors, sorrows, cares, and pains, and behold with delight, in the condition of a tranquil mind, the joys of the heavenly life. Yea, rather it proclaims this by its groans; “Mine eye,” it says, “is confused, because of anger; I have grown old among all mine enemies.”

​       But that it is said to be found in an island, of Thebes, which is named Topazion from whence it has also received its name, is to be understood in two ways; namely, that those regions, that is, of the Egyptians, abound most of all in companies of monks, and that whosoever dwells near the Sun of righteousness is indeed colored by the brightness of ethereal light. And the gem of contemplative sweetness is beautifully put the ninth in order, as the perfection of active life is the eighth; or, because nine orders of angels, whose life it imitates, are found in holy Scripture; or, because it is removed from the denarius of perfect blessedness by the one step of death. It was for this that the prophet panted with the greatest desire, when he said, “Therefore I have loved Thy commandments above gold and the topaz,” that is, I was delighted with the most sweet love of Thy commandments, above all the glory of approved action, and above all the sublimity of contemplative joy, which can come to pass in this age; and “the first and greatest of these is, ‘Thou shalt love the Lord thy God, with all thy heart, all thy soul, all thy strength.’ ” But it is most certain that this can only be brought to perfection in the height of the heavenly kingdom." ​